The Web-Afghan in Japan (WAJ) recently conducted an interview with Mr. Fateh Sami, an Afghan Academic, former Kabul Times Editor, SBS Radio Assistant and senior freelance journalist on the recent development in Afghanistan. The transcript of the interview is presented here below. (Interviewer is Juichi Noguchi)

WAJ: Why the Taliban so quickly captured Kabul?

A: Let me please to respond to your query after a brief background information for awareness of your readers and listeners. You may know that the USA invaded Afghanistan in the name of fighting terrorism, headed by Bin Ladin, the leader of al-Qaeda after the 9/11 terror attack. When Taliban administration was active in Afghanistan, it was officially recognised and supported by Pakistan and Saudi

Arabia. Bin Ladin after 9/11 attack left Afghanistan for Pakistan. Where was he hiding? Obviously, next to the headquarter of ISI for over ten years. Thus, Taliban have been raised and trained in Pakistan as proxies of ISI. So, Taliban has not captured Kabul, Pakistan has done.

WAJ: Yes, we know. It is reported that Bin Ladin was killed on 2nd of May in 2011 at Abbottabad, near Pakistani military facility by US Secret Unit. Pakistani authorities say they didn’t know about American secret operations, but I can’t believe it.

A: How can Pakistani authorities deny that Al Qaeda Bin Ladin was not killed by US Special Forces during a raid at a compound in Abbottabad, Pakistan. But still they reject, no doubt that they are liars.

WAJ: Also, we are aware that there was rivalry between the USA and USSR after the second World War known as the cold war era.

A: For sure you are likewise cognizant that after the People’s Democratic Party of

Afghanistan (PDPA) which in a military coup toppled President Daoud’s government, grabbed the power. Then the new government of PDPA initiated certain social and economic reforms such as land reforms, literacy eradication program and so on. During the implementation of those reforms the pro-soviet communist government made many blunders and stupid things. Consequently, party activists acted in a provocative way and their pugnacious behaviour in the community, roused people and forced them to join the newly emerged insurgency and resistance forces. Subsequently, a civil conflict raged across the country. Millions of people left their homes and sought asylum in the neighbouring countries of Pakistan and Iran and around the world.

WAJ: Yes, we know well. In addition, I also know that the PDPA sought Soviet support for resolving inner conflicts in their party and for competing against armed resistance in or out of the country to social reforms. Then the Soviet Union sent troops. As a result, the Afghanistan issue has evolved into a global problem at once.

WAJ: Yes, now coming back to our question, “Why the Taliban so rapidly entered Kabul?”

A: It is a good question. But it has not a short simple answer. You know that the training centre of Taliban is Pakistan. Taliban militants are the proxy of Pakistan. Other countries are also supporting them mainly, the USA, Pakistan, Saudi Arabia, and Britain as I have stated in my articles and substantiated with evidence, even Benazir Bhutto, former Pakistan prime minister, assassinated by Taliban approved that in her book.

WAJ: After defeating the PDPA administration in 1992, the Mujahideen factions started off violently fighting each other and since then the war intensified in Afghanistan. So, in 1994, Pakistan (ISI), Saudi Arabia, the USA, and Britain gave up on the mujahideen factions especially Heze- Islami headed by Gulbuddin Hekmatyar and turned to creation and development of the same extremist Pashtun Taliban. In 1996, the Taliban came to power in Afghanistan, and Bin Laden and others who supported the Taliban also moved into Afghanistan, causing the 9.11 incident.

A: In 2001, after the invasion of USA the Taliban were defeated, their military machine smashed, and their Emirate administration or government collapsed in two months by the American and the forces of the so-called Northern alliance. “However, there is not such an alliance, it is a term made up by General Musharraf, former Pakistani president to denigrate the resistance forces of Ahmad Shah Masoud. After defeat there was not any Taliban militia for almost three years.

How they again appeared and got revived? They were invigorated by their patrons mainly -Pakistan, Britain, the USA, and Saudi Arabia, according to Benazir Bhutto.

WAJ: Pakistani President Pervez Musharraf raised the Taliban and created a pro-Pakistan government in Afghanistan, but was forced to cooperate in crushing the Taliban under the strong pressure of US President Bush jr. I remember his bitter face expression at that time.

A: Well, The Taliban militia was initially created By Nasrallah Babur, Minister for home affairs in the cabinet of Benazir Bhutto. But, for sure General Musharraf and the ISI raised and promoted them continually. No government in Pakistan can deny that country has not been used for terrorists training centre since Afghan Mujahidin war against the former Soviet Union. Bearing in mind that Hamid Karzai and Ashraf Ghani the two Afghan presidents who were installed in power with the support of the USA in an ostentatious, fake, and rigging election. Their power base was very weak as compared to the Mujahidin government. Due to their ethnic affiliation they both (Karzai & Ghani) with the help of Zalmay Khalilzad supported the Taliban to undermine the power base of other ethnic groups in their governments.

WAJ: USA, Britain, and NATO countries wanted the Karzai and Ghani administration to be stable, but they were disgusted by their incompetence and corruption and did not produce any results, so they decided to switch to the Taliban before they knew it.

A: Most people who were appointed in the key military positions were pro Pakistani agents, and most of them favour the Taliban because of their ethnic tendency and affiliation. But the experienced military offices were sacked or was retired at young ages. Moreover, the population on the two sides of the Durand borderline, the disputed borderline between Afghanistan and Pakistan, are dominantly Pashtun ethnicity. The Pakistani military along with the Taliban from the other side of the borderline in the name of the Taliban enter Afghanistan. While they are Pakistani, but difficult to recognise them because they are quite similar by look and dialect.

The Taliban did not capture all cities and districts through combat operation. It was not a military conquest but a political plot of the government to surrender the army strong positions to Taliban. The army was ordered to withdraw intentionally and to let the Taliban capture the areas and get access to the military arsenals, heavy artillery, tanks, and vehicles.

WAJ: The conspiracy was created in secret negotiations between the USA and the Taliban over the years. Wasn’t it? When?

A: No doubt about that I agree. In Doha meeting, the USA special envoy for so-called peace negotiations Zalmay Khalilzad, and Pakistani authorities had already been programmed on many issues, handing over the affairs of Afghanistan to Pakistan. The decisions had already been adopted behind the scenes on how to put the Taliban into power, including the form of the prospective government structure and the duration of the interim administration prior to an election for apparently establishing a “broad-based government.” The Doha meeting continued for over two years. It seems as if everything has already been planned to include how the power should be transferred to the perspective interim administration and on the replacement of Ashraf Ghani.

WAJ: What is the main reason for the abrupt collapse of the Ghani’s government?

A: The unexpected collapse is related to many factors which are mainly.

§ Cooperation and tendency of the government with Taliban.

§ the army was not supported to attack the Taliban by Ghani government.

§ Logistic and necessary types of equipment, arms, ammunition, and food were not provided for the Army, especially when they were surrendered or caught in an ambush

§ the agreement between Pakistan and the USA to hand over Afghanistan’s affairs to Pakistan.

§ the favouritism of the fifth column, favouring the Taliban.

§ the Afghan government supported strengthening the Taliban and impeded fighting against them due to ethnic inclination.

§ the foreign intelligence influence in continuing fighting to plunder the mineral resources of Afghanistan and to boost the narcotics trafficking and their drugs business income.

§ the most important military and political decisions were made by Ashraf Ghani and his associates. When the three of them intentionally under the guidance of America and Britain give direction to the military field

commanders to evacuate their positions, causing the speedy fall of many areas to the control of the Taliban.

§ most importantly, the process of the Doha peace negotiation or conspiracy to bring Taliban to power, was disrupted unexpectedly when Ashraf Ghani and his team (nicknamed as the government of three people) fled secretly the country, creating an unexpected and unpredictable power vacuum. The power was not handed over to an interim administration properly. The vacuum of power was created intentionally by Ghani (it is not known yet whether Ghani’s flee was arranged in negotiation with the American Embassy in Kabul or it was solely decided by Ashraf Ghani Ahmadzai himself to avoid facing the destiny of former Afghan president, Dr Najibullah Ahmadzai who was hanged by Taliban.) because Ashraf Ghani had a long conversation with American authority in Kabul and in Washington prior to his flee, reports say.

§ It was one of the conditions of Taliban that in the so called, peace condition president Ghani must step down and resign from government and will not have any role in the new government.

▪ He may under the direction of America or himself intentionally created a power vacuum to sabotage the whole process. The power vacuum fostered the rapid collapse of the Kabul regime.

§ The popular uprisings against the Taliban were not assisted and intentionally disrupted by Ghani and his team of three.

I hope I was able to address to your query which illustrates the unexpected fall of the Kabul government. I am fully in the picture how the situation developed in various ways during the last four decades. The conditions in Afghanistan have been going on in a proxy war, where there are multiple players involved one way or another, going on like a documentary film for over forty years. but unfortunately, it is still unknown when and how the constant tragedy will finally end up.

WAJ: Thank you. We highly appreciate your cooperation and time in this respect and pay tribute to your keen analysis expressed distinctly in your articles. We also admire your courage for the consistent criticism and denunciation of the corruption Ashraf Ghani’s administration and the crimes committed by the Taliban. We believe that the people of Afghanistan together and on their own will be able and as they are surely determined to overcome

this predicament standing on their way. We believe that as long as that activity is in place, the international community will not abandon those seeking peace and progress in Afghanistan. Finally, it is a limit to what we can do, but we can convey your voices to Japanese laguage understanding reader all over the world. Although it is a modest force, We pledge to do my best. thank you again. 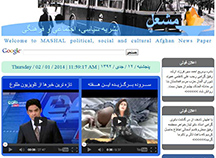